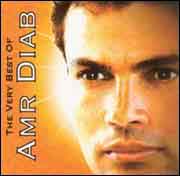 Born as Amro Abd Al-Bassit Abd Al-Aziz Diab at Port Said, Egypt. He obtained his bachelor degree on Arabian music in 1986. He sang for the first time when he was only six years old in the ceremonies of July revolution.

The governor of Port Said gave him a guitar present due to his singing talent. In 1982 Amro moved to Cairo upon the request of Hani Shenoda the composer and in the same year he released his first album "Sing from your heart".

Most of his 16 albums so far had met wide popularity all over the Arab world and even globally.

He also obtained many local and international prizes in song festivals, including his song "Nour El Ain".