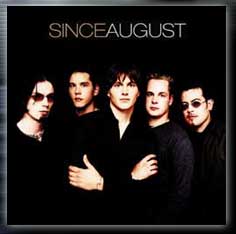 Since the band's inception in 1997, Since August has developed a reputation as one of the hardest working bands in the country. Their list of accomplishments to date equals an impressive resume including highlights such as:

- Named one of Access Magazine's Top 10 Canadian Artists to Watch.
- Winners of Beer.com's International Battle of the Bands.
- Playing with Kid Rock at the Docks in Toronto.
- Showcasing at the Mercury Lounge in NYC and Johnny Depp's Viper Room in Los Angeles, California.
- Their first video, If You, added to rotation at MuchMusic, MuchLoud, EdgeTV, and MTV Canada .
- Their second single, Too Gone, reached #60 on the Canadian rock charts.
- Nominated for a 2002 ECMA in Best Rock Artist category.
- Their 28-date cross Canada tour last fall.
- Signing a three-album record deal with Loggerhead Records.
- Sharing the stage with other Canadian artists such as Big Sugar, Staggered Crossing, By Divine Right, Shocore, Clarknova, Grindig, and Crush.